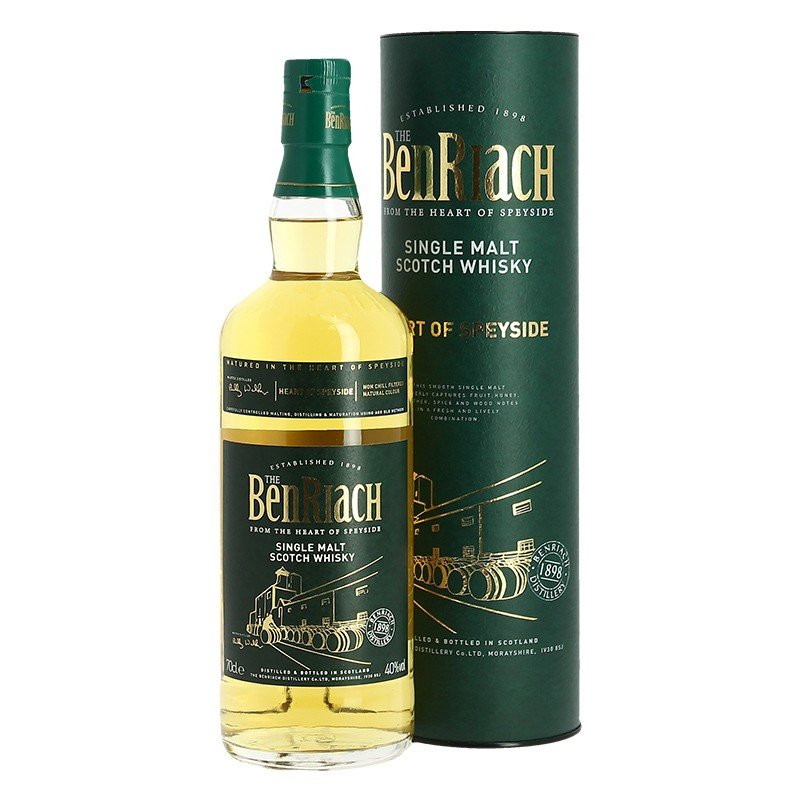 Benriach which translates to stag hill in Gaelic, is a Speyside distillery. It has long been ignored by the general public because it is mainly used to produce malts used for blends. The creation of this distillery dates back to 1898 by John Duff, a member of the Grant family. Unfortunately Benriach had to close its doors in 1900 following the bankruptcy of Cie Pattisson, which was the biggest buyer of whiskeys at the time. This resounding Crack almost endangered the whole whiskey industry in Scotland. Benriach was built a stone's throw from Longmorn and was also called Longmorn 2 for a time. Following the Pattisson bankruptcy, the Benriach distillery was used as a malt house for Longmorn. It was in 1965 that it was rehabilitated as a distillery by Glenlivet. Benriach whiskeys have a double identity now clearly assumed! This Speyside distillery produces unpeated malts but surprisingly also peated malts. The explanation is simple, in 1978 the distillery was bought by Chivas, which in turn was bought by Seagram. The Seagram group needed peated whiskeys to make their blends and the demand for peated Islay whiskeys was starting to rise! The decision was taken in 1983 to entrust Benriach with the production of peated malts. In 2001 Pernod Ricard bought Seagram. A production rationalization campaign shows that Bentiach only distilled 3 months a year! When Pernod Ricard decided to part with 4 distilleries in 2004, including Benriach, Billy Walker, the former director of Burn Stewart found investors to buy the distillery. It was then the real rebirth of Benriach, with a range that went from a single 10-year-old reference to a rich range of treasures contained in the cellars.

This whiskey is a Single Malt. To be a Single Malt, a whiskey follows two essential rules. It is produced in a single distilleriece which gives the Single, then come only from malted cereals: the Malt. This malted cereal must be barley, however in rare cases rye may be used. Scotland is the largest producer of single malt whiskey. These are then Scotch Single Malt Whiskey, but there are other producing countries such as Japan, India, the Czech Republic or France which also produce excellent Single Malt. The conditions are always the same, the whiskey must be the product of one and the same distillery and the cereal used must be malted barley. This BENRIACH HEART OF SPEYSIDE Single Malt Whiskey 70 cl is a whiskey from Speyside, a region located by the North Sea, in the heart of the Highlands. It produces about 60% of the volumes of single malts in Scotland, it is the region which has the largest quantity of still operating distilleries: around fifty. Everything is organized around the River Spey which is the main river which gave its name to the Speyside region. Other rivers flow whose name evokes the distilleries which drink there, one can quote the Livet for Glenlivet, the Fiddich for Glenfiddich, the Deveron for Glen Deveron and they flow as far as the golf of Moray, which gave the Glen Moray. There are a few exceptions where peat-dried malts have been used, Speyside malt whiskeys are not peated. The common characteristic of Speyside whiskeys is a certain roundness and a lot of elegance. The aromas are always balanced between the fruity touches and the notes of freshly harvested grains, Speyside whiskeys evoke the great classicism of Stottich Malts. For your information know that Speyside Glenlivet was King George IV's favorite whiskey!

4 other products in the same category: