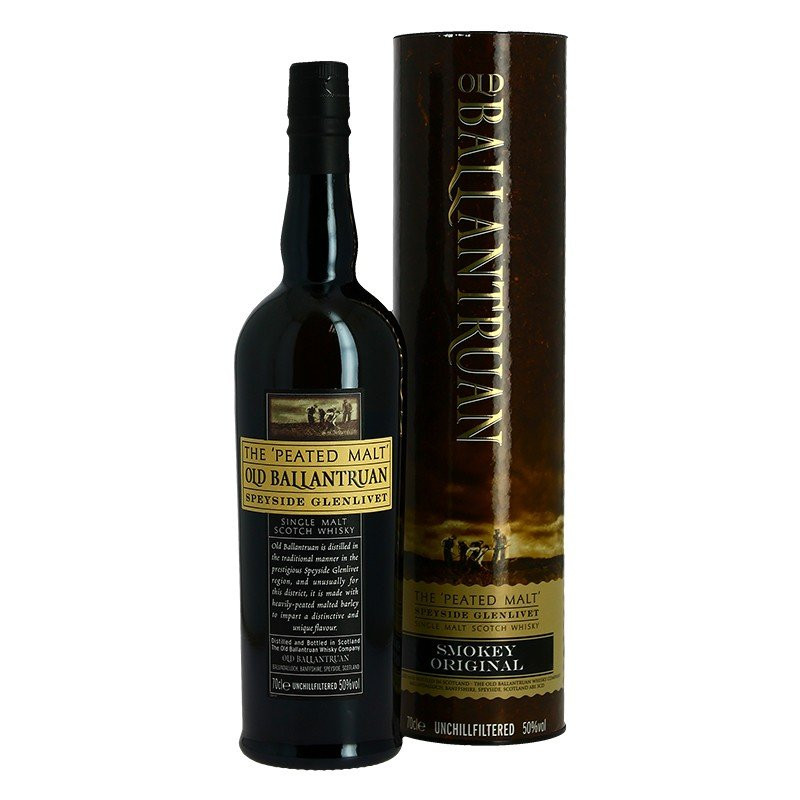 This OLD BALLANTRUAN Speyside Peat Whiskey 70 cl is from The Glenlivet. During his visit to Scotland in 1822, the sovereign George IV asked that he be served Glenlivet. More than the quality of this magnificent Speyside single malt from the Moray region, it was a political gesture of the king since Glenlivet was the first distillery to come out of hiding by acquiring in 1824 an official license to distill. Glenlivet quickly became known as the quintessential Scotch whiskey, smooth, complex with hints of cookies, toffee, wood and exotic fruits. The Glenlivet style has been so copied to the point that Mr Smith filed the trademark in 1876, then multiple legal actions from 4 years later resulted in 1884 that the Glenlivet distillery won the right to be called The Glenlivet, l he unique and genuine Glenlivet distillery, the whiskey from the valley of the river Livet. Despite everything, other distilleries have kept the right to use the Glenlivet suffix as a guarantee of style and quality, and even today with the Glen Spey Glenlivet for example. The Glenlivet is the best-selling single malt brand on the other side of the Atlantic and the second largest brand in the world behind the unmistakable Glenfiddich. The Glenlivet is part of the composition of Chivas Real and Chivas Royal Salute. The OLD BALLANTRUAN Speyside Peat Whiskey 70 cl is a Single Malt. To be a Single Malt, a whiskey must obey two essential rules. This whiskey must come from a single distillery, hence the Single, but also come only from malted cereals (Malt). This malted cereal must be barley under exceptional conditions, sometimes rye is used. Scotland is the biggest supplier of single malt whiskey. These are then Scotch Single Malt Whiskey, but there are other countries such as Japan, India, the Czech Republic or France which also produce Single Malts. the conditions remain the same, this whiskey must come from a single distillery and the cereal used must be malted barley.

This whiskey is a whiskey from Speyside, a region located by the North Sea, in the heart of the Highlands. It produces about 60% of the volumes of single malts in Scotland, it is the region which has the largest quantity of distilleries still in operation, around fifty. Everything was organized around the River Spey, the main river that gave its name to the Speyside region. Other rivers flow and their name evokes the distilleries which drink there, one can quote the Livet for Glenlivet, the Fiddich for Glenfiddich, the Deveron for Glen Deveron and they flow in the golf of Moray, which has given the Glen Moray. With some exceptions, where peat-dried malts have been used, Speyside malt whiskeys are not peated. The characteristic common to the whiskeys of this region is a certain roundness and a lot of elegance. The aromas are always balanced between fruity touches and touches of freshly harvested grains, Speyside whiskeys evoke the great classicism of Stottich Malts. For your culture know that Speyside Glenlivet was King George IV's favorite whiskey! This OLD BALLANTRUAN Speyside Peat Whiskey 70 cl is a Scotch whiskey. Scotland has the largest number of active distilleries with more than 97 malt distilleries listed. Most often and by tradition, distilleries use double distillation, a regulated distillation since the 17th century! This shows to what extent the famous "scotch whiskey", known and recognized for its taste qualities, is part of Scottish heritage. Five main regions are commonly accepted: the Lowlands to the south and the Highlands to the north are the two largest, Speyside which lies to the northeast, Campbeltown and the islands (Orkney, Skye, Mull, Jura and Arran) and finally the he Isle of Islay, on which there is certainly the highest density of malt distilleries in the country.