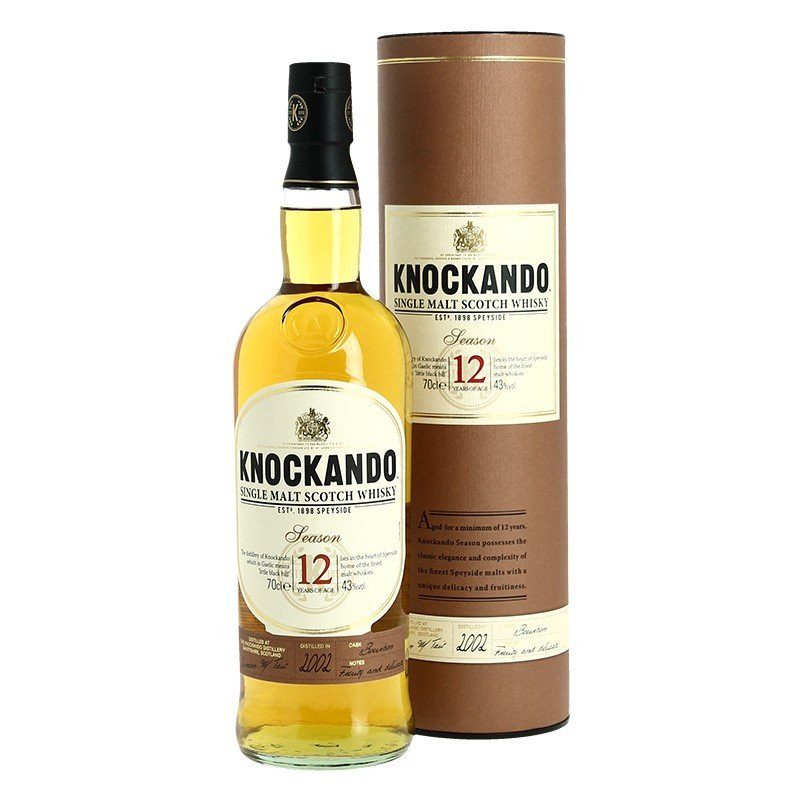 This 12 year old Knockando is a single malt Whiskey produced in Scotland in the Speyside appellation area.

Knockando which can be translated as little black hill in Gaelic, is a distillery in the Moray region of Speyside built in Knockando in 1898.
It draws water only from the Cardnach spring. Knockando was one of the first distillery to distribute its whiskey also in the form of single malt.
The whiskeys produced by Knockando are one of the bases of J & B's Blends (Justerini & Brooks), they are also very well known in France and Spain.
Knockando is above all fairly light single malts, barely peated to serve as a taste support with touches of fresh almonds in its younger versions, with fruity touches.
One of the characteristics of Knockando is to vintage all its productions. Visiting the distillery with its pagoda-shaped roofs is a beautiful moment.

This whiskey is a whiskey from Speyside, a region located by the North Sea, in the heart of the Highlands. It produces about 60% of the volumes of single malts in Scotland, it is the region with the most distilleries still in operation, around fifty.

Everything was organized around the River Spey, the main river that gave its name to the Speyside region. Other rivers flow and their name evokes the distilleries which drink there, one can quote the Livet for Glenlivet, the Fiddich for Glenfiddich, the Deveron for Glen Deveron, they flow as far as the golf of Moray, which gave the Glen Moray.
With some exceptions, where peat-dried malts have been used, Speyside malt whiskeys are not peated. The common characteristic of Speyside whiskeys is a certain roundness and a lot of elegance.
The aromas are always balanced between fruity touches and notes of freshly harvested grains, Speyside whiskeys evoke the great classicism of Scottish Malts.

This whiskey is a Single Malt.

To be classified as Single Malt a whiskey follows 2 immutable rules.
It must be the product of a single distillery which explains the word Single, then come only from malted cereals (Malt).
This malted cereal must be barley in rare exceptions it may be that rye is used. Scotland is the main producer of single malt whiskey.
These are then Scotch Single Malt Whiskey, but there are other producing nations such as Japan, India, the Czech Republic or France which also distill good Single Malts.
The rule is the same, the whiskey must come from one and the same distillery and the cereal used must be malted barley.