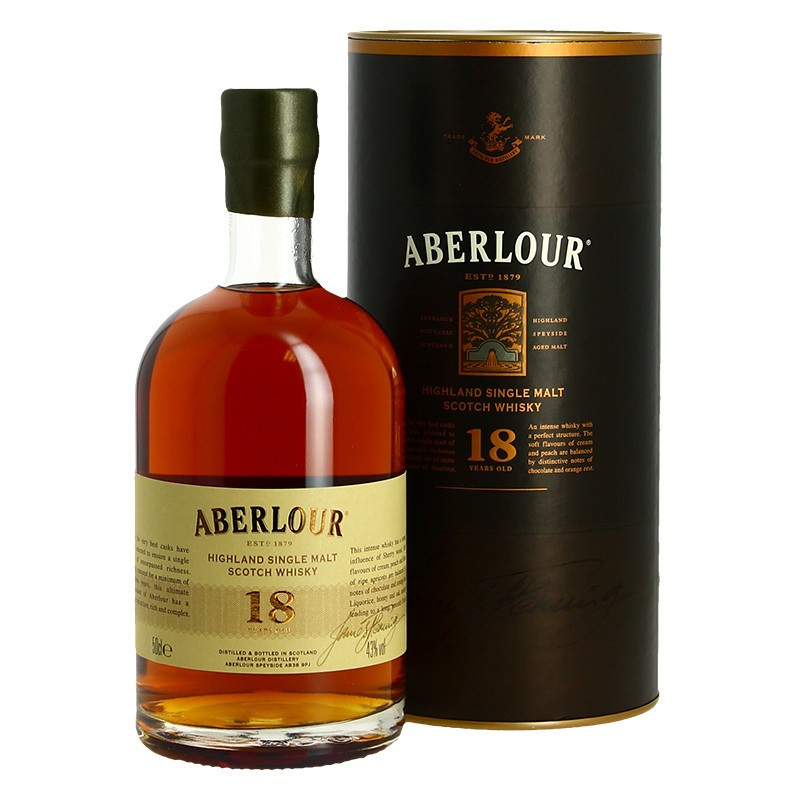 ABERLOUR 18 years old is a Single Malt from the Speyside region finished in Sherry casks. The name of the Aberlour distillery comes from the village of the same name, located in the middle of the Speyside region. It benefits from the softness and purity of the water from the Lour river. Created in 1879 by James Fleming, the whiskeys from this distillery are most often round, fruity, spicy and very balanced. The master blender of this distillery benefits from a hundred-year-old know-how and perpetuates the tradition giving this distillery the possibility of producing some of the most complex single malts. This ABERLOUR 18 year old Speyside is a Single Malt. To be classified as Single Malt a whiskey follows two important rules. This whiskey be produced in a single distillery which explains the Single, but also come only from malted cereals (Malt). This malted cereal must be barley, however in exceptional cases rye may be used. Scotland is the biggest single malt supplier. These are then Scotch Single Malt Whiskey, but you will find other nations such as Japan, India, the Czech Republic or France which also produce good Single Malt. The principles remain the same, the whiskey must come from a single distillery and the cereal used must be malted barley.

The ABERLOUR 18 year old Speyside Single Malt is a whiskey from Speyside, a region located by the North Sea, in the heart of the Highlands. It produces about 60% of the volumes of single malts in Scotland, it is the region which has the largest number of distilleries still in activity, around fifty. Everything is organized around the River Spey which is the main river that gave its name to the Speyside region. Other rivers flow whose name evokes the distilleries which drink there, one can quote the Livet for Glenlivet, the Fiddich for Glenfiddich, the Deveron for Glen Deveron and they flow in the golf of Moray, which gave the Glen Moray. With some exceptions, where peat-dried malts have been used, Speyside malt whiskeys are not peated. The characteristic common to the whiskeys of this region is a certain roundness and a lot of elegance. The aromas are always balanced between the fruity touches and the notes of freshly harvested grains, Speyside whiskeys evoke the great classicism of Stottich Malts. For your information did you know that Speyside Glenlivet was King George 4's favorite whiskey. This ABERLOUR 18 year old Speyside Single Malt is a Scottish whiskey. Scotland is where you will find the largest number of active malt distilleries with over 97 known distilleries. Most often and by tradition, distilleries practice double distillation, a regulated distillation since the 17th century! Undoubtedly one of the reasons why the famous "" scotch whiskey "", recognized for its taste qualities, is part of the Scottish heritage. 5 main regions are commonly accepted: the Lowlands to the south and the Highlands to the north are the two largest and arguably best known, Speyside to the northeast, Campbeltown and the islands (Orkney, Skye, Mull, Jura and Arran) and and finally the Isle of Islay, where there is probably the highest density of malt distilleries in the country.

6 other products in the same category: