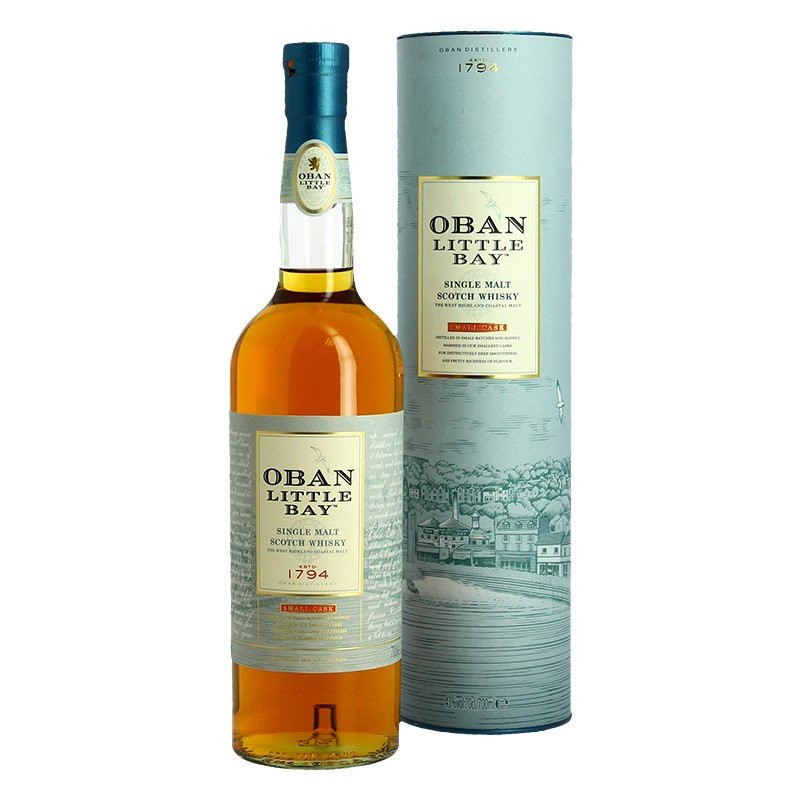 This Oban Little Bay Single Malt Highlands Whiskey is a whiskey produced in Scotland, sold by the Oban brand.

OBAN Little Bay Highlands Whiskey, Oban is a distillery classified in the Highlands and yet located on the Isle of the Hebrides, the marine influence is therefore great. Oban is in the West Highlands. Oban was created in 1794 and the distillery took over the activity of a brewery. This distillery is the oldest distillery in Scotland and one of the smallest. It will remain so because the land reserve on the island is very limited between the cliffs and the sea. This distillery is one of the last urban distillery, established in the main street in the city. The Oban distillery produces only 700,000 liters per year. Oban is one of the Classic Malts representing the Highlands. The Oban style is a touch of smoke, a malt with a dry and lively finish.

To be classified as Single Malt a whiskey must obey 2 immutable rules. It must be the product of a single distillery, hence the Single, then come only from malted cereals: the Malt. The malted grain must be barley, but in exceptional cases rye may be used. Scotland is the main supplier of single malt whiskey. These are Scotch Scotch Single Malt Whiskey, but there are other countries like Japan, India, the Czech Republic or France which also distill good Single Malts. the conditions remain the same, the whiskey must come from a single distillery and the cereal used must be malted barley.