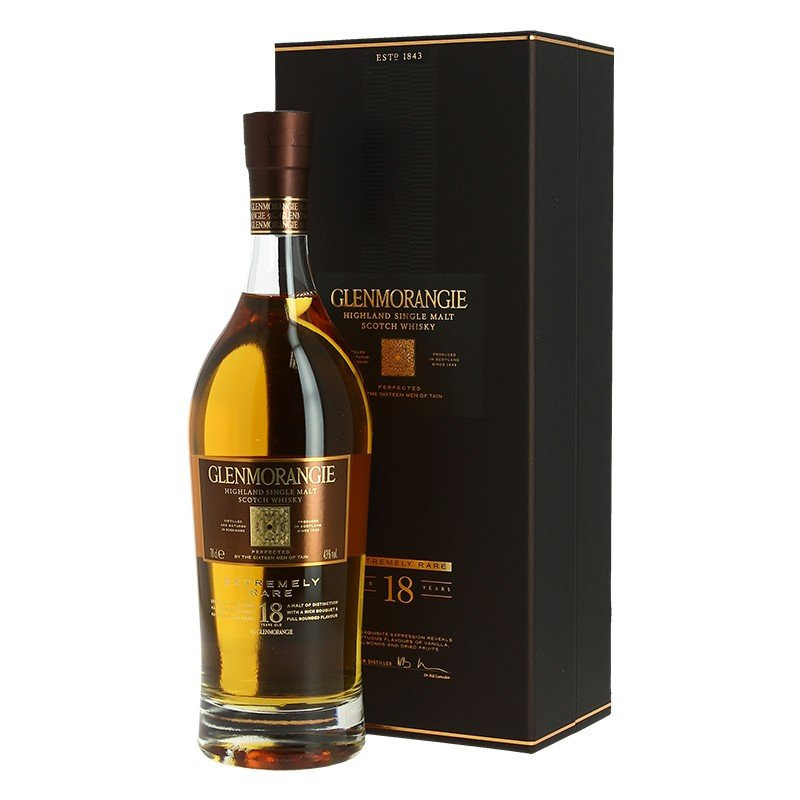 This GLENMORANGIE 18 YEARS OLD Highlands Single Malt 70 cl is a whiskey produced in Scotland with the Highlands appellation, sold by the Glenmorangie brand and aged 18 years.

The Glenmorangie Distillery is an institution of the United Kingdom. Of the 10 million bottles produced, around 6 million are sold in the UK. We can say that it is the benchmark Single Malt of the British. Glenmorangie, distillery of the Eastern Highlands started its distillery activity in 1843, the first 2 stills bought second-hand being then intended for the manufacture of Gin. With their 8 meters and a 3-meter pass, the distillery claims to have the tallest stills in Scotland, which Bruichladdich refutes. It can be played at a few centimeters ... The height of these stills allows the production of a light, supple Single Malt. Water from the Tarlogie spring, rich in minerals, is the second element that gives Glenmorangie its specificity. During the 1990s, the distillery acquired around 600 acres of land around the distillery to control the quality of the water it draws. Glenmorangie has been owned since 2004 by LVMH and Diageo, the upmarket shareholder policy implies that 100% of production is sold in Glenmorangie bottles. The production of the fabulous BNJ blend (Baillie Nicol & Jarvie) is therefore no longer possible. Human intervention is crucial in the manufacturing process of a Glenmorangie bottle, the distillation is carried out by the "Sixteen men of Tain". Then maturation is entrusted to a team led by Mr Lumsden who is at the origin of the aging program in different "Extra Matured" barrels such as Port, Sherry, Sauternes or even red wines. This program is so central to Glenmoragnie's development and differentiation strategy that the distillery now has its oak forest in Missouri. The barrels produced in the USA dry for 2 years before being rented to Heaven Hill or Jack Daniel's then cross the Atlantic then welcome Glenmorangie.

The GLENMORANGIE 18 YEARS OLD Highlands Single Malt 70 cl is a Single Malt. To be a Single Malt a whiskey must follow 2 important rules. The whiskey be produced in a single distillery (Single), then come only from malted cereals (Malt).
This malted cereal must be barley in exceptional cases it happens that rye is used. Scotland is the biggest single malt producer. These are called Scotch Single Malt Whiskey, but there are other producing countries such as Japan, India, the Czech Republic or France which also distill Single Malts.
the conditions remain the same, the whiskey must come from a single distillery and the cereal used must be malted barley.

This whiskey has spicy notes. The spicy touches of a whiskey come mainly from the wood of the barrel in which it has aged. This wood was heated during the construction of the barrel, and the wood was previously toasted if ever the barrel sheltered Bourbon. The mastery of this heating of wood is therefore essential and influences the transmission of these notes of spices to the whiskey. The most common spice touches are vanilla, pepper and cinnamon. Seigne (rye) especially which is a cereal, gives the whiskey a remarkable peppery spicy note, put the nose once in the Bourbon Bulliet Etiquette Verte composed of 95% rye and you will understand.

This GLENMORANGIE 18 YEARS Highlands Single Malt 70 cl has fruity notes, which evokes a notion of lightness in the aromas and flavor on the palate. The yeasts used play an essential role in the final result and in general, as soon as a whiskey is neither peaty, nor smoky, nor iodized, then fruit aromas appear. The main families of fruits are white fruits such as peaches, pears and apples, red fruits, citrus fruits but also dried fruits such as walnuts and fresh hazelnuts.

7 other products in the same category: