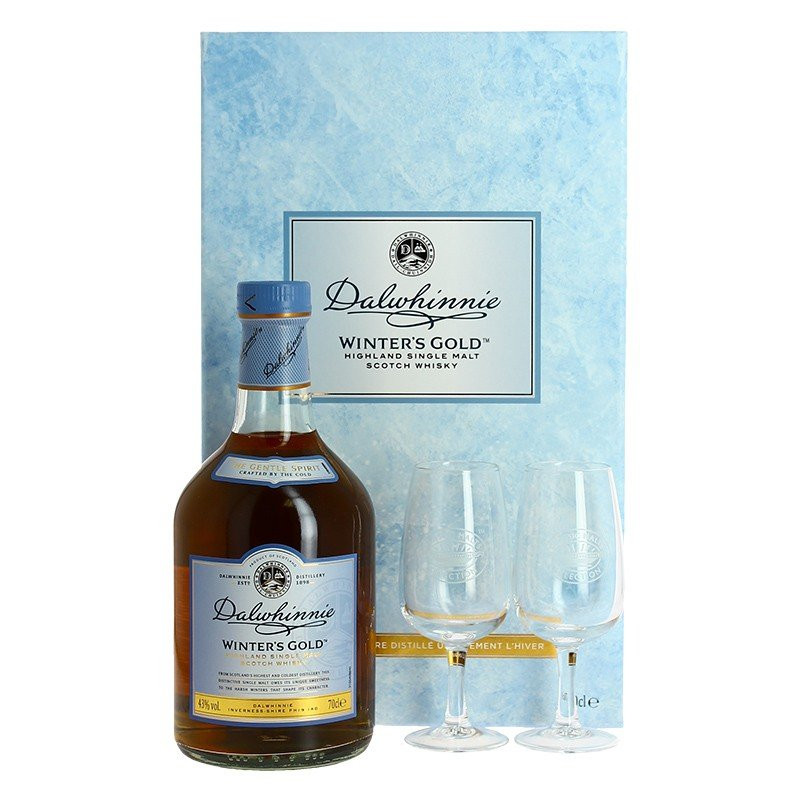 Dalwhinnie Winter's Gold Whiskey is a whiskey produced in Scotland, marketed by the Classic Malts brand.

The Dalwhinnie distillery is owned by the LVMH group and is part of the selection of Classics Malts. This distillery is there to represent the whiskeys of the Highlands. Mission not very obvious so the whiskeys of the Highlands offer great differences from one region to another. Dalwhinnie distributes smooth and supple single malts with a fairly dry finish. The latest Winter's Gold production refers to the harsh winters experienced by this region located at an altitude of 326 meters. Dalwhinnie is part of the composition of the Black & White blend. This Dalwhinnie Winter's Gold Whiskey is a whiskey from the Highlands, a region renowned as much for its scotches, which is the largest region in terms of scotch whiskey production, as for its Highlanders Games or its famous Loch Ness. In the Highlands, a region in the north of Scotland, there are whiskeys of rare diversity, since under the same regional name coexist 30 distilleries, with styles as different as the whiskeys of the islands, with the exception of Islay (Jura, Skyes ...), whiskeys from the fertile plains of the West of Scotland, whiskeys from mountainous areas like Ben Nevis, and whiskeys from the north like Old Pulteney and Glenmorangie. This is why the Highlands region has been subdivided into 4 production regions which are Eastern Highlands, Central Highlands, Western Highlands and Northern Highlands.

To be a Single Malt a whiskey must follow 2 important rules. This whiskey must come from a single distilleriece which explains the Single, and come only from malted cereals (Malt). This malted cereal must be barley in rare exceptional cases rye may be used. Scotland is the largest producer of single malt whiskey. These are called Scotch Single Malt Whiskeys, but there are other countries, for example Japan, India, the Czech Republic or France that also offer good Single Malts. The principles remain the same, the whiskey must be the product of a single distillery and the cereal used must be malted barley.

The spicy touches of a whiskey come mainly from the wood of the cask in which it was aged. This wood was heated during the construction of the barrel and toasted beforehand if ever the barrel sheltered Bourbon. The experience of this wood toasting is therefore essential and influences the transmission of these spicy notes to the whiskey. The most common spice notes are vanilla, pepper and cinnamon.

Dalwhinnie Winter's Gold Whiskey has floral notes that evoke notes of fresh flowers like heather, violet, orange blossom, rose or lavender. These touches are very subtle and the quality and the number of distillations really influence the perception of these very fine aromas. Notes of perfumes such as incense can also emerge from the more oily, heavier elements of the whiskey.

This Dalwhinnie Winter's Gold Whiskey is fruity, which evokes a notion of lightness in the aromas and flavor on the palate. The yeasts used have an essential role in the final result and in general, as long as a whiskey is neither peaty, nor smoked, nor iodized, fruit aromas appear. The main families of fruits are white-fleshed fruits such as peaches, pears and apples, red fruits, citrus fruits but also fruits. Dalwhinnie Winter's Gold Whiskey is ideal for an aperitif.