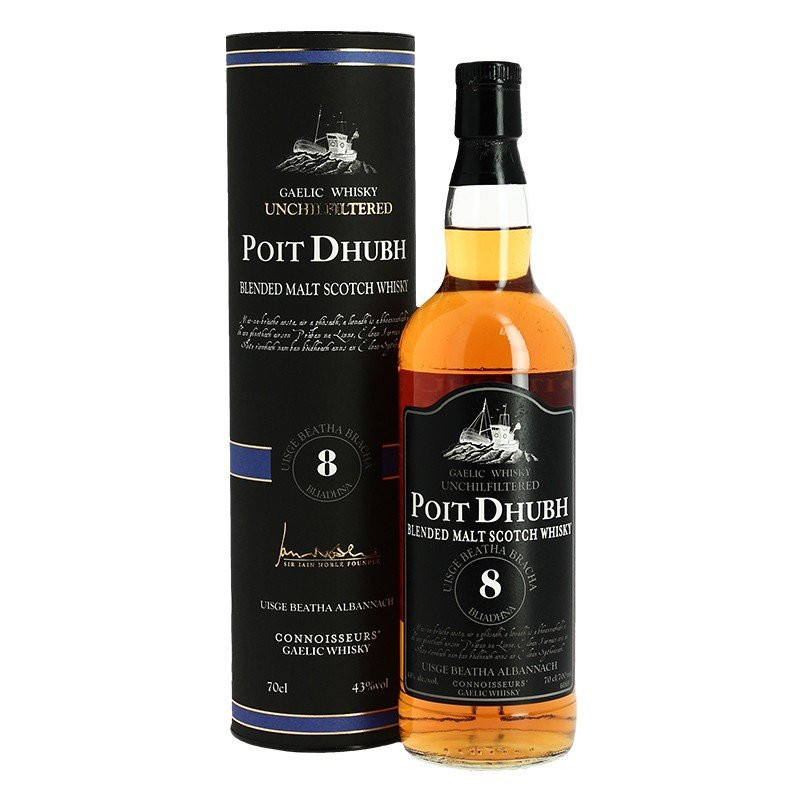 8 year old Poit Dhubh is a Gaelic Whiskey produced in Scotland, it is a Blended Malt which has been finished in sherry cask.

This whiskey is a Blended, which are the origin of the whiskey. Translated from English to blend means to assemble, mix. This is what happens with this type of whiskey, which is a blend of whiskeys from multiple origins. The blend is made from whiskeys of several cereals, made from malt, coming from different distilleries or of different ages. In the beginning the big brands of Blend whiskeys were English wine and spirits distribution houses which assembled multiple Scotch whiskeys according to a particular recipe. Blends are found around the world in different countries such as Japan or Ireland. If it is a mixture, some blends are still in high demand around the world because of excellent quality.

Scotland has the largest number of active malt distilleries with over 97 known distilleries. Generally by tradition, distilleries use double distillation, distillation regulated since the 17th century! It is not without reason that the famous "" scotch whiskey "", known and renowned for its taste qualities, is part of Scottish heritage. Five main regions are commonly accepted: the Lowlands to the south and the Highlands to the north are the two largest and certainly best known, Speyside to the northeast, Campbeltown and the islands (Orkney, Skye, Mull, Jura and Arran) and finally the island of Islay on which is arguably the highest density of malt distilleries in the country.

that evoke touches of fresh flowers such as heather, violet, orange blossom, rose or lavender. These notes are very subtle and the quality and the number of distillations really influence the perception of these fine aromas. Notes of perfumes such as incense are also perceptible carried by the more oily, heavier elements of this Blended Malts Whiskey.