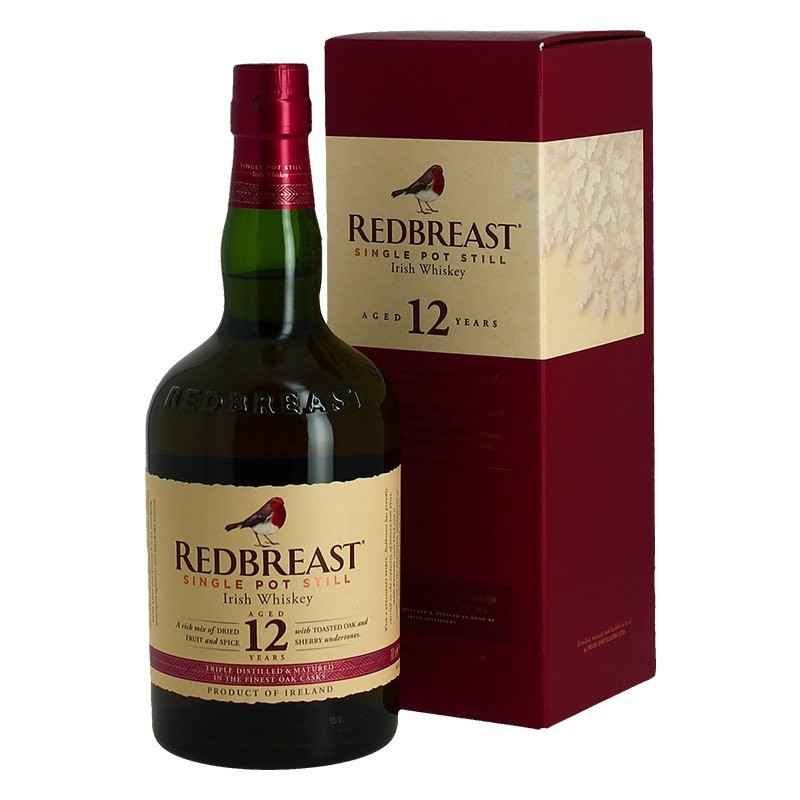 Redbreast 12 Years Old Irish Whiskey Single Pot Still 70 cll is a whiskey produced in the Republic of Ireland, marketed by the brand Redbreast and aged 12 years.
The Redbreast brand was launched by Jameson in 1939 to sell its pure pot still Irish Whiskey. Redbreast is an Irish Whiskey whose origin is a mixture of equivalent portions between unmalted barley and malted barley, the use of a copper still and above all an aging in Bourbon barrels and first filling sherry casks. Today this range of formidable whiskeys recognized worldwide is produced in the Middleton distillery in Cork according to the original process. You will be impressed by the sweetness and the fruitiness of this whiskey, it is a great success.
This Redbreast 12 YEARS Irish Whiskey Single Pot Still 70 cll is an Irish whiskey. Irish whiskeys are characterized by the absence of peat except for Connemara, the use of unmalted barley, large stills called "Charentais" and of course triple distillation. Ob obtains very fine and fruity whiskeys like the notes of blackcurrant from Redbreast. You will find several brands such as Teeling, Inishowen, Tullamore Dew, Yellow Spot, Clontarf, Paddy, Jameson, Bushmill, Power's, The Irishman, Murphy's, or Power's. It is undoubtedly with these products and the Cocktailmaster that you will make a perfect Irish Coffee. This Redbreast 12 YEARS Irish Whiskey Single Pot Still 70 cll has fruity notes, which evokes a notion of lightness in the aromas and its flavor on the palate. The yeasts used have an essential role in the final result and in general, as soon as a whiskey is not peaty, smoked or iodized, fruit aromas appear. The main fruit families are white flesh fruits such as peaches, pears and apples, red fruits, citrus fruits but also dried fruits such as nuts and fresh hazelnuts.