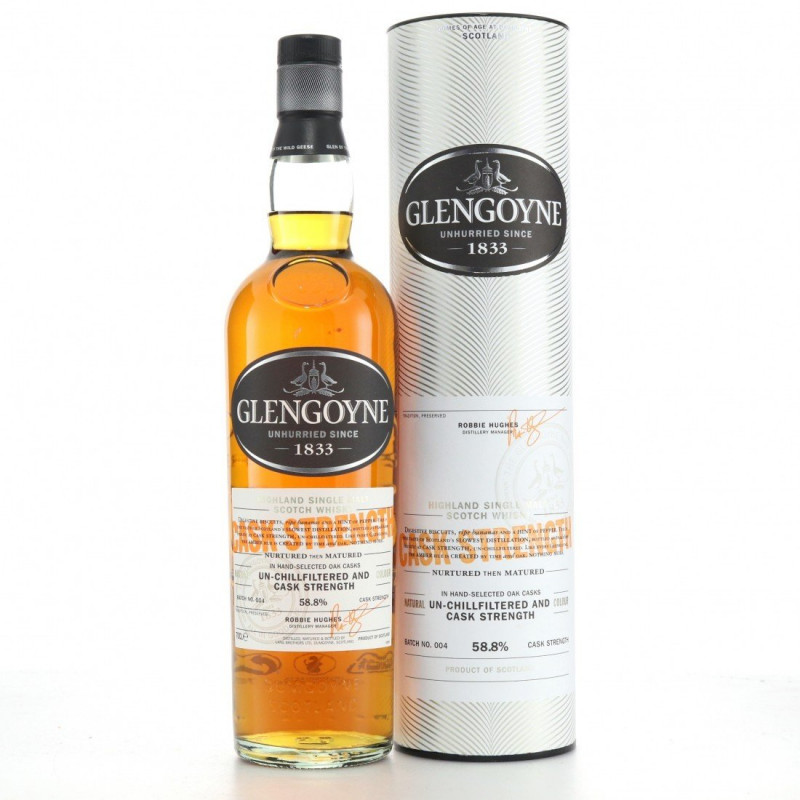 Glengoyne Cask Strength bottled at 58.9 ° is a Scottish Whiskey from the Highlands region.

Glengoyne which means Valley of the Wild Geese in Gaelic, is a Highland distillery located north of Glasgow. One of the peculiarities of Glengoyne is to dry its Malts with hot air instead of peat fires. The little peculiarity of Glengoyne comes from its stills located in the Highlands while its storage cellars are in the Lowlands. Its supple and fruity and slightly spicy style would tip the scales towards a Lowland style, complex and delicate, but it is indeed a Highlands. Glengoyne is sold as a Single Malt under its name but is also used in the constitution of Blend Langs. This Glengoyne Cask Strength Highland Single Malt 58.9 ° is a whiskey from the Highlands, a region known as much for its whiskeys, which is the largest region in scotch whiskey production, as for its Highlanders Games or its famous Loch Ness. In the Highlands, a region in the north of Scotland, there are whiskeys of a breathtaking diversity, because under the same regional name coexist 30 distilleries, with styles as different as the whiskeys of the islands, with the exception of Islay (Jura, Skyes ...), whiskeys from the fertile plains of the West, whiskeys from the mountainous areas, and whiskeys from the north such as Old Pulteney and Glenmorangie. This is why this region has been subdivided into 4 production regions which are Eastern Highlands, Central Highlands, Western Highlands and Northern Highlands.

The Glengoyne Cask Strength Highland 58.9 ° is a Single Malt.

To be a Single Malt a whiskey must obey two important rules. This whiskey must come from a single distilleriece which gives the Single, then come only from malted cereals: the Malt. The malted grain must be barley, sometimes in exceptional cases rye may be used. Scotland is the largest producer of single malt whiskey. These are called Scotch Single Malt Whiskey, but there are other producing countries, for example Japan, India, the Czech Republic or France, which also distill tasty Single Malt. The principles are always the same, this whiskey must come from a single distillery and the cereal used must be malted barley.